The Little Rock, Arkansas race series have been on my radar for quite some time.  They are known for their huge, over-the-top medals and unique race themes. The 2020 theme was “Totally Awesome” as a tribute to the 80s.

I like to maintain a base level of fitness with an average of 40 minute runs at least 4 days a week.  I did not follow a fancy plan. During January and February, I was intentional about adding a weekend run with a pace no faster than 9:00 miles.  Training alone allowed me the luxury of sleeping in on Saturdays and letting the Winter temperatures reach their warmest. Anything below 20° “feel like” is a No-Go.  I was caught in the rain a couple of times. I maxed out at 12 miles, two weeks before race weekend.

During the last two long runs it felt like my Hokas were not going to be good enough for 13.1 miles.  They were causing me to get a blister although I only had 254 miles on them. I made a last minute decision to get new shoes.  This is a major No No, but I would rather go back to my tried and true Brooks than know I would suffer 8 miles into the race.

I went to Swags and explained how I had run in Brooks for the last 6 years up until the latest Glycerin was very ill fitting.  They suggested I try the Ghost 12. It fit. The problem was I only had a few short runs to taper miles. I did not know how they would do for speed and endurance.  More on that later. 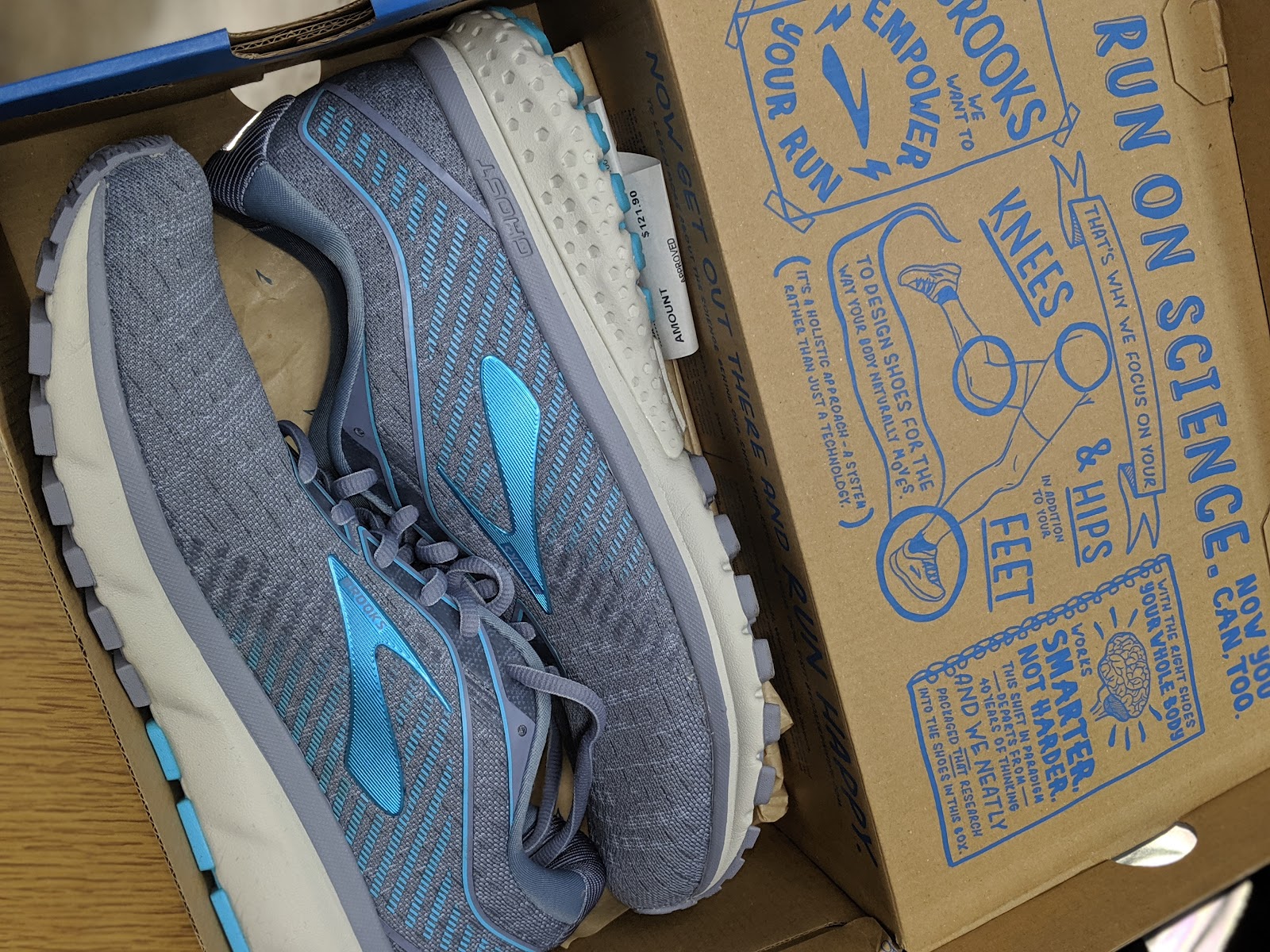 I am thankful for my co-workers who supported and encouraged me.  I was able to squeeze in most of my shorter runs on my lunch break or during class.  I do not take for granted the privilege of teaching P.E., and literally being able to run around with my Smootents.

There were no direct flights from Louisville to Little Rock.  The drive time was 7.5 hours which was equal to flight travel time with layovers included.  The host hotel was the Marriott, but I chose to stay one block down at the DoubleTree. I politely asked for a river view room (odd numbers) and a late check out.  Requests granted.

I hit the highway when the school buses rolled out after school on Thursday.  I made it to Memphis to get gas stop at the Nike Clearance store in the Graceland area.  Two hours later, I was in North Little Rock.  I booked a late night hotel rate on Priceline, and got some much needed rest.

Points of Interest in Little Rock:

Less than 3 miles away from my first hotel was The Old Mill.  It is a picturesque park that was created as a replica of the grist mills from Arkansas’s early pioneers. 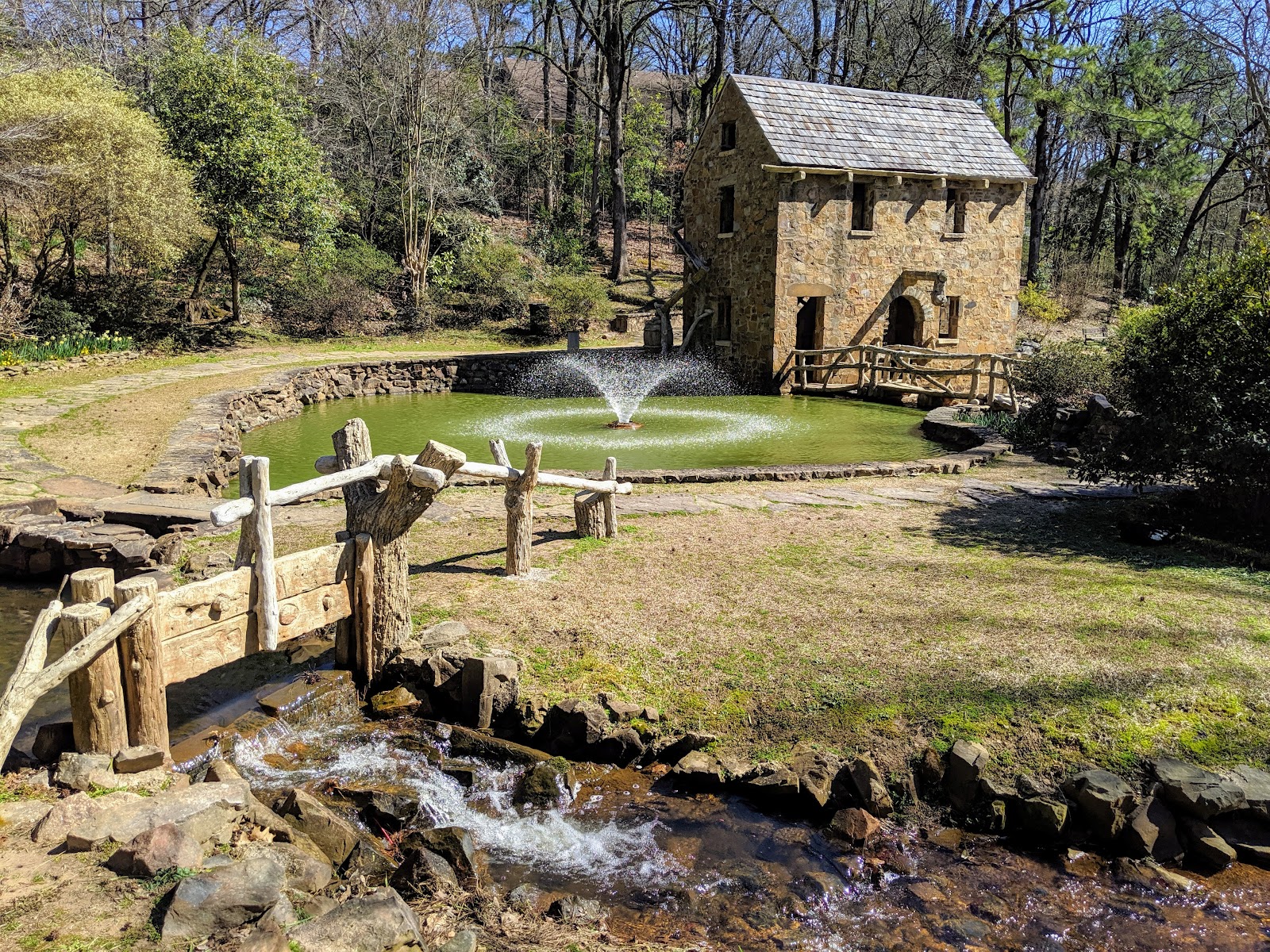 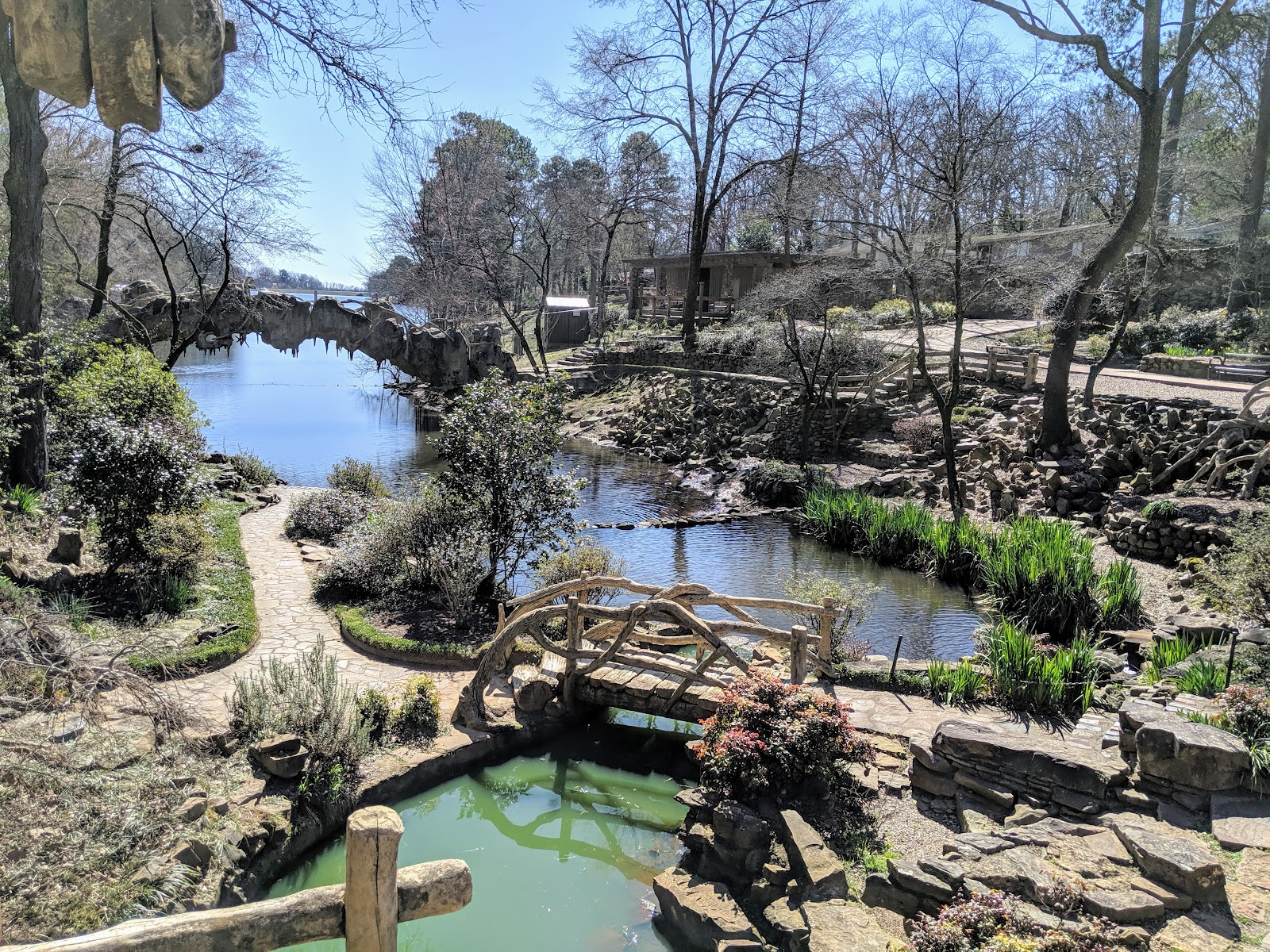 The intricately designed space is popular for wedding and other photo shoots.  Here are some 10-second self timer shots of yours truly: 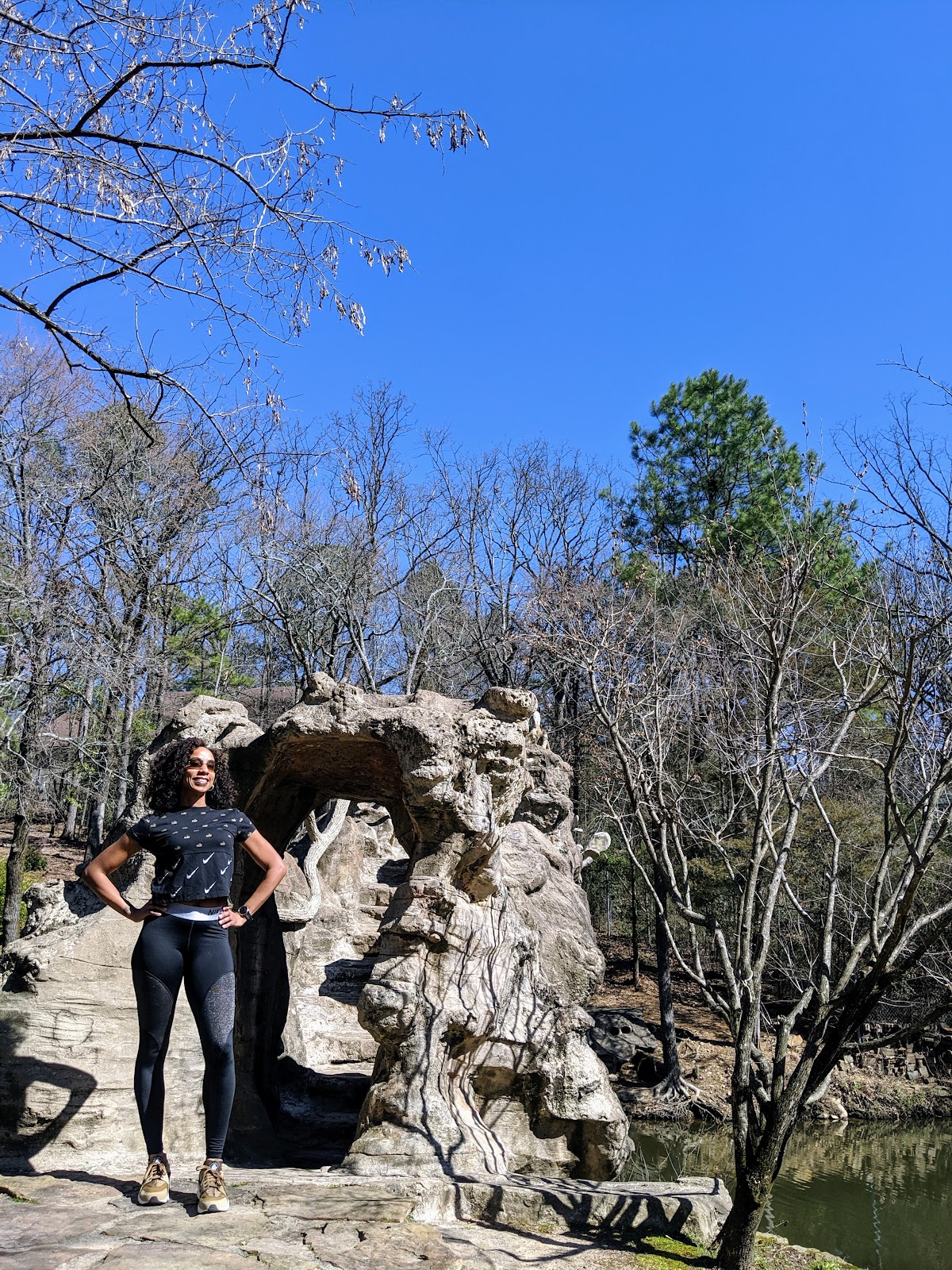 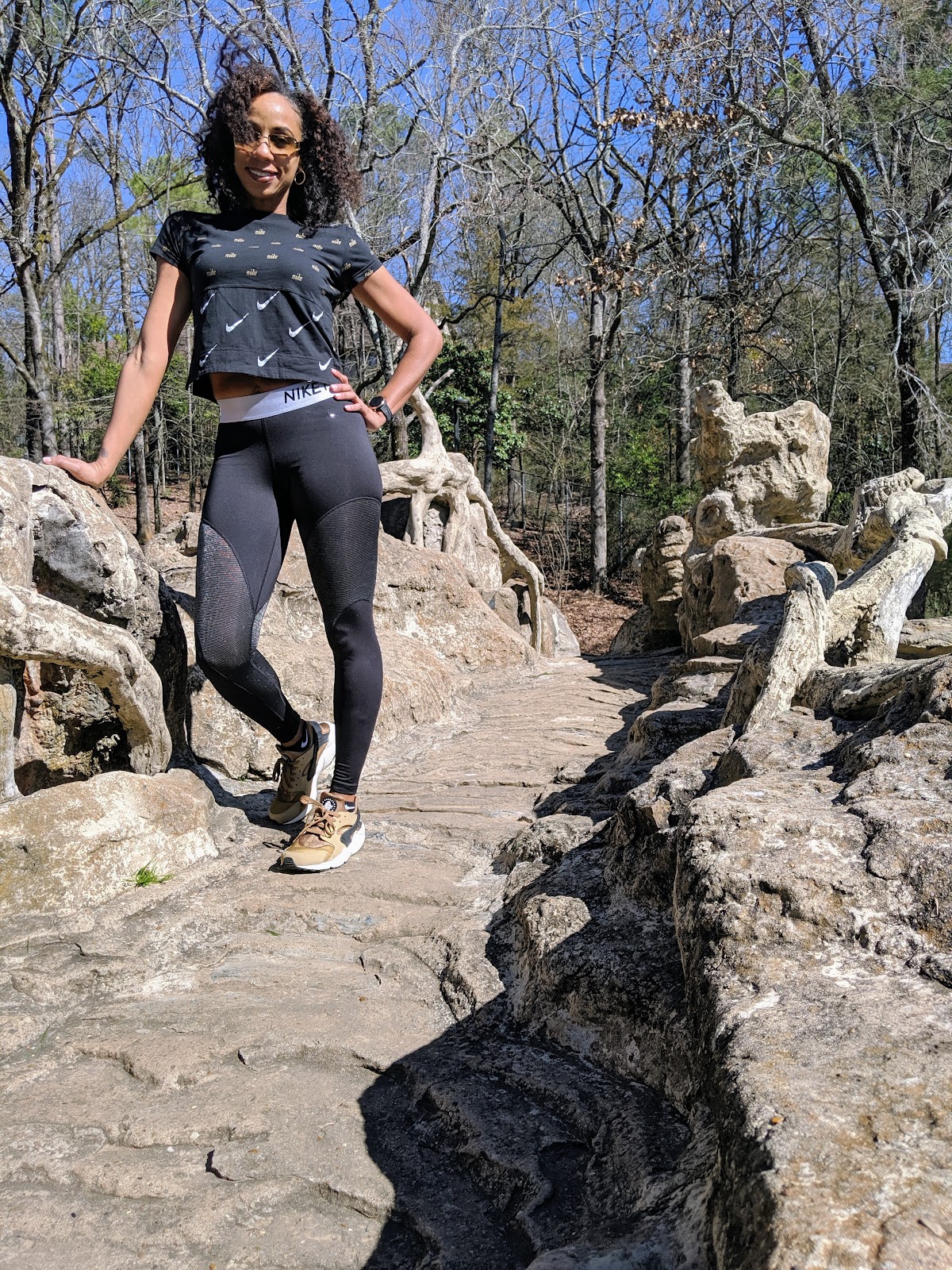 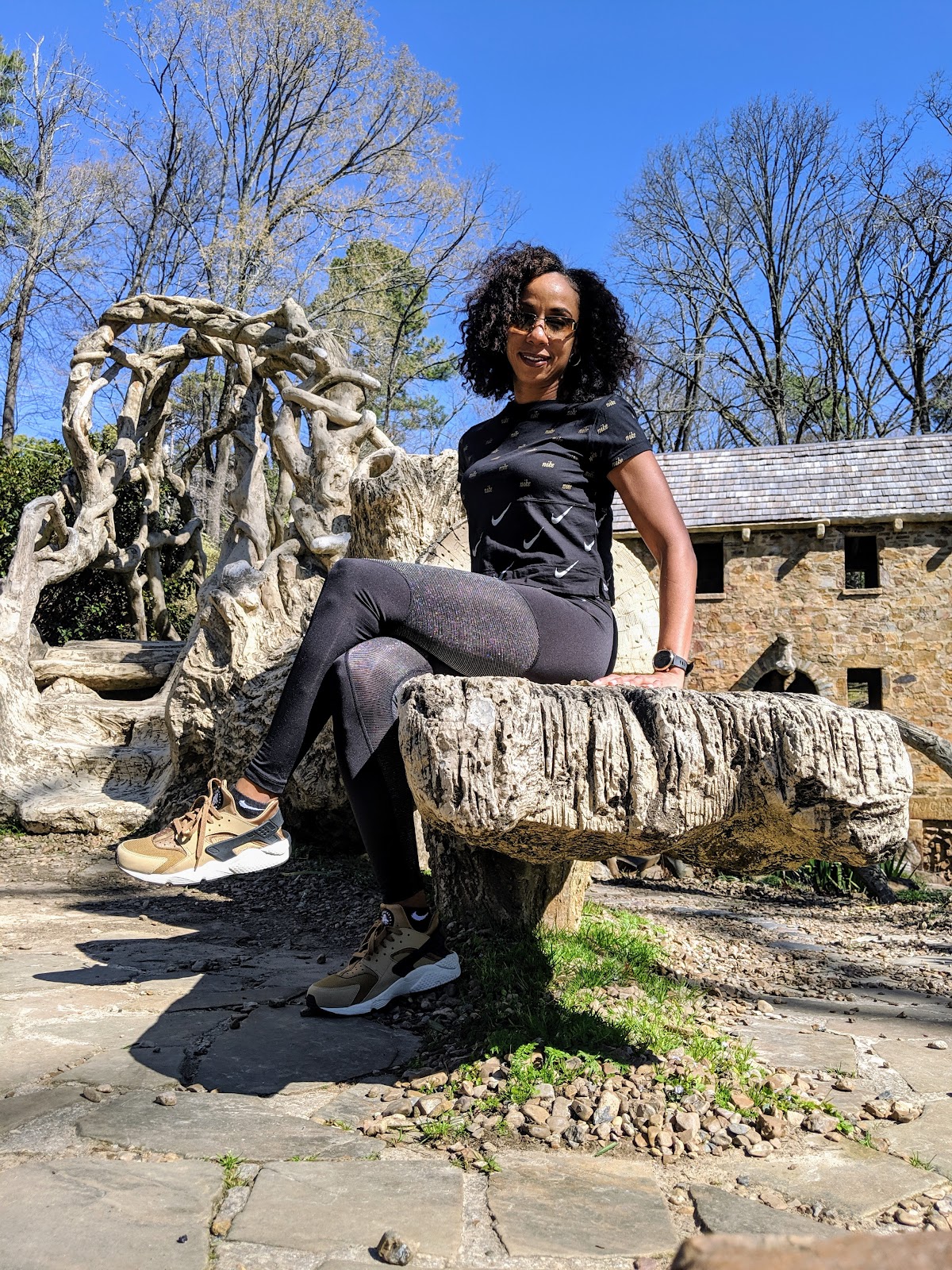 This area is a five minute walk to the Statehouse Convention Center which is the location for race packet pickup.  Parking is free and easy to find on a Friday afternoon. 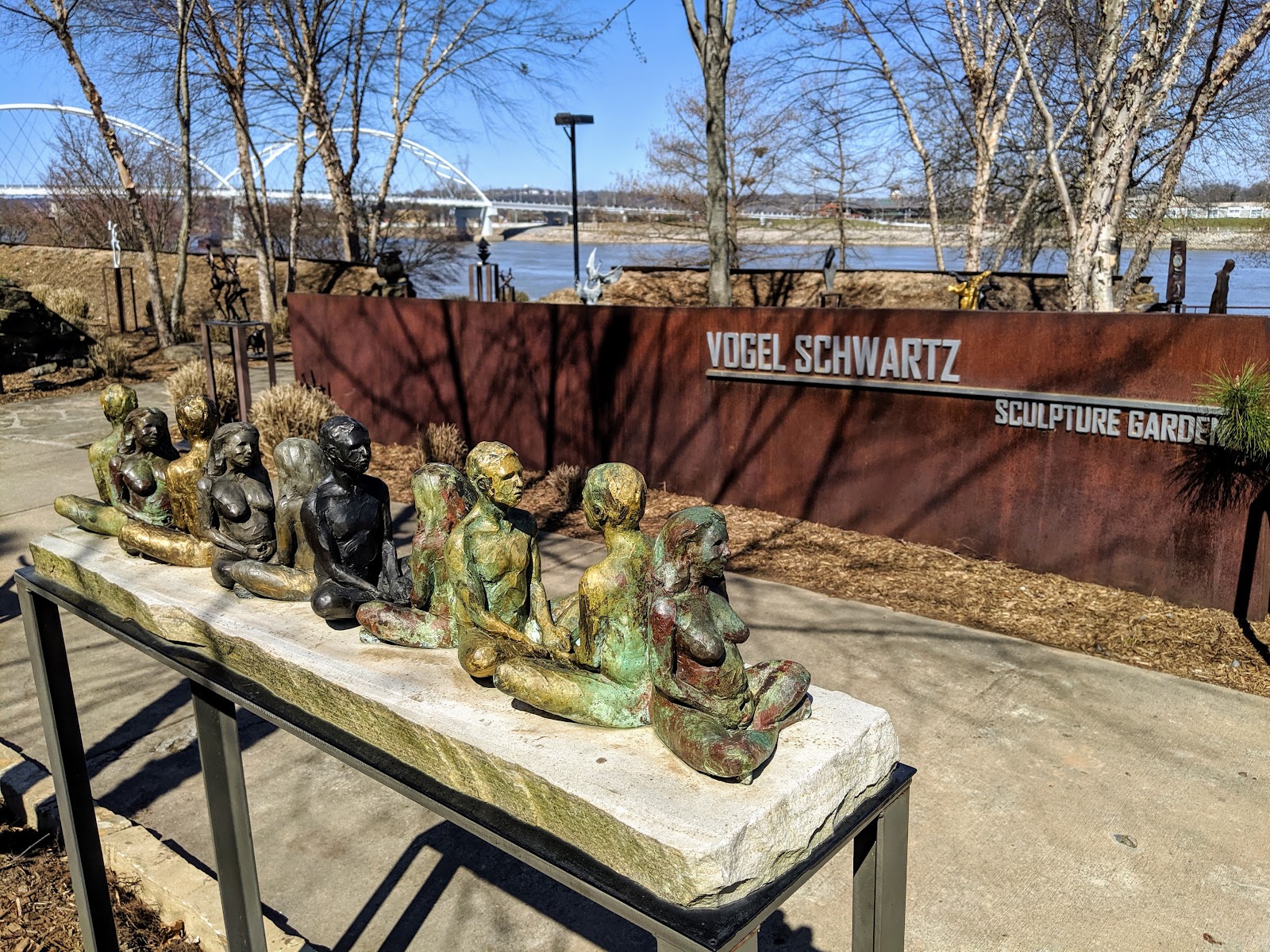 Why is it called “Little Rock”?

The French settlers named one side of the river La Petite Roche. The other side was called Big Rock.  The Native Americans were from the Quapaw Tribe. This is what remains of this area that has been developed with fitness trails and a six bridge skyline. 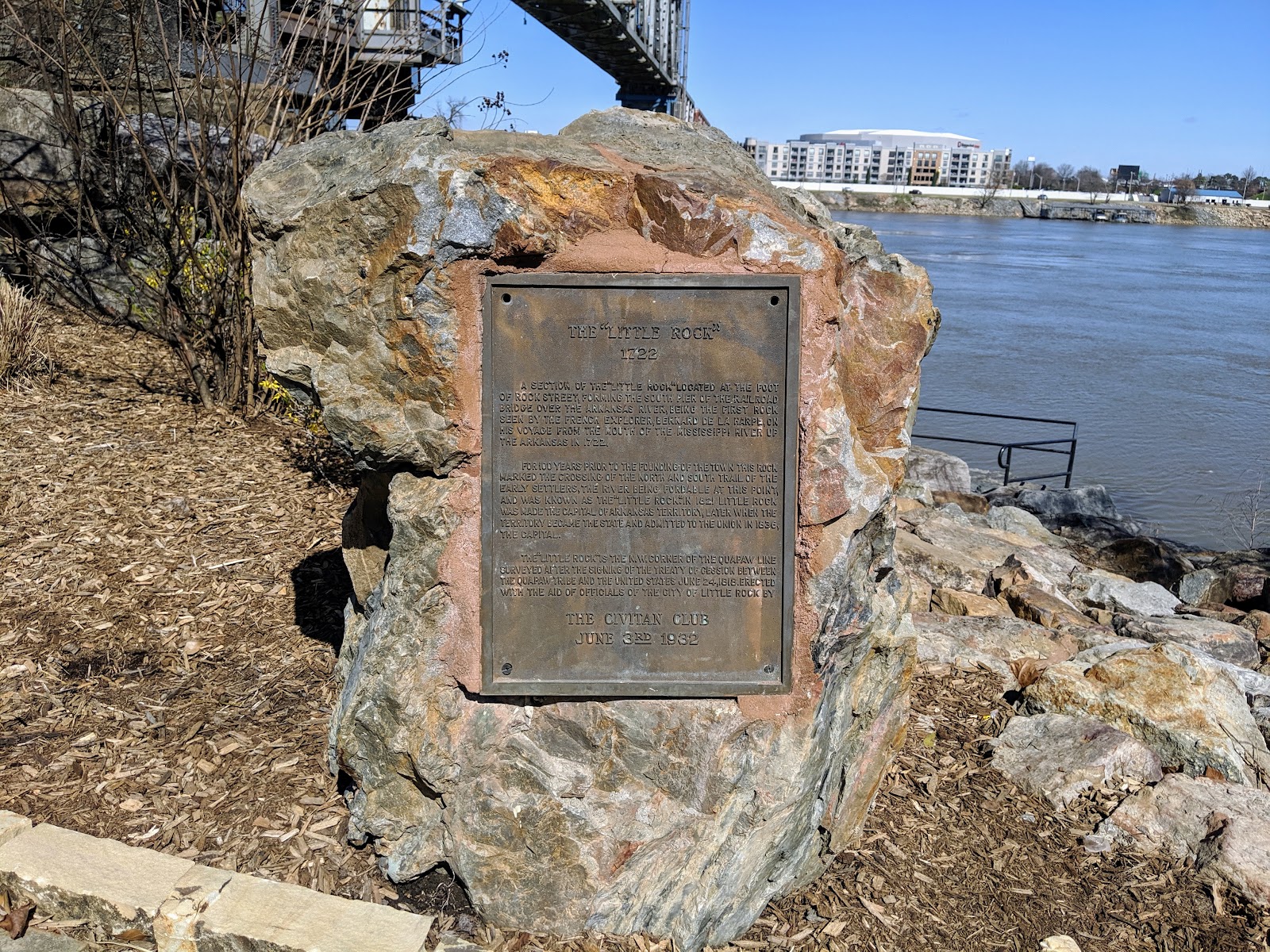 This photo looks like a postcard, but it is actually a frame cut out facing the Junction Bridge. 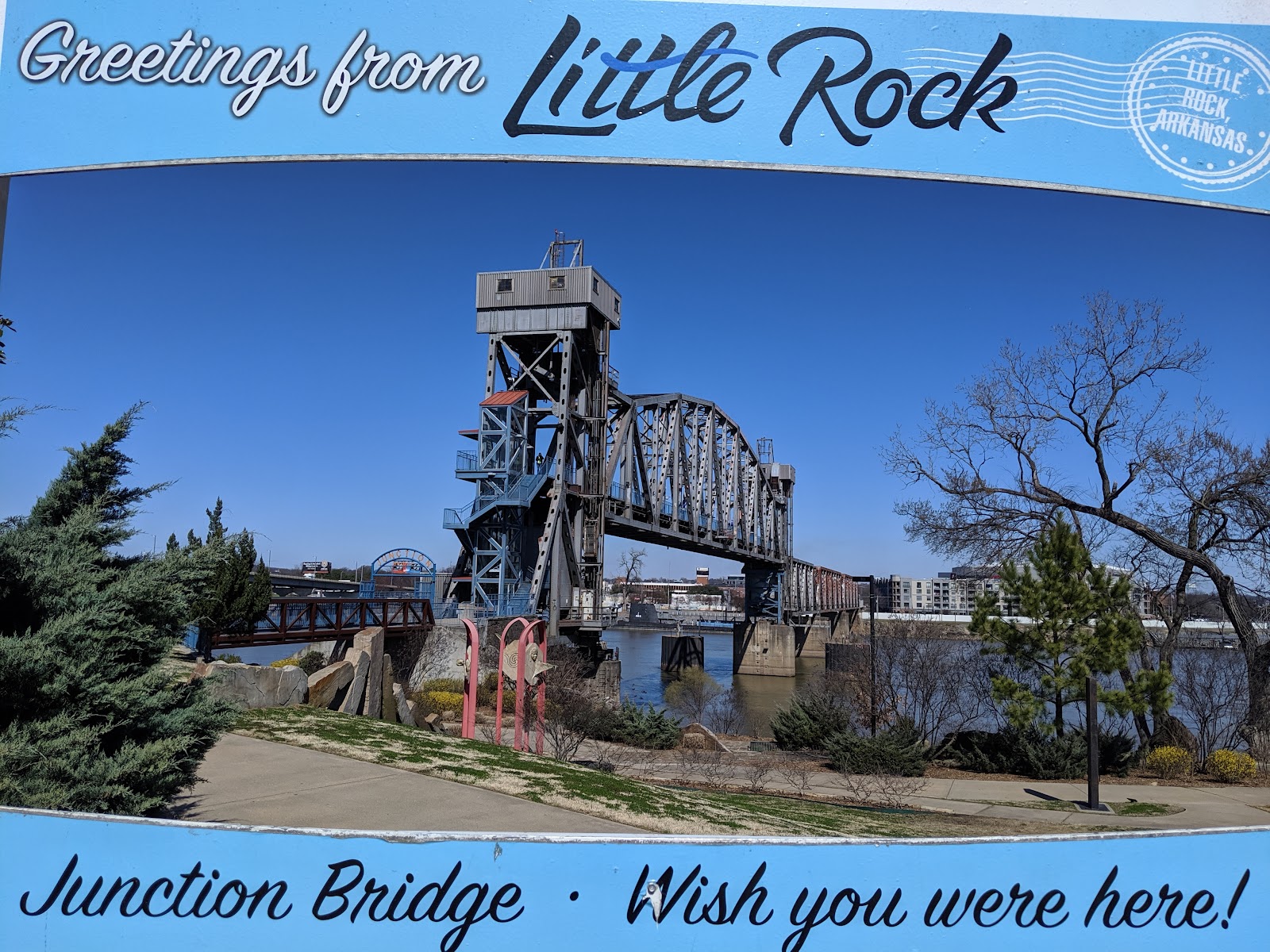 The most significant part of my day was learning more about the Little Rock Nine on a tour of Little Rock Central High School.  I had so many things to do that I had forgotten to reserve a spot 48 hours in advance. I called in the morning and explained I was a teacher in town for the marathon, and it would be an honor to be included with the tour.  They were able to squeeze me in with a 6th grade tour group. It’s just meant for me to be surrounded by middle schoolers.

The “United” sculpture was installed in 2017 on the 60th anniversary of the integration of Central High.

School was in session while we toured the auditorium and the cafeteria to learn about the horrific racism faced by The Little Rock Nine.  Cameras and large bags are strictly prohibited for the safety and privacy of the students.

Across the street from the school is the gas station that was the media hub.

It was gut wrenching to stand on the same side walk, walk up the same entrance, and be in the hallways of where children were tormented by their peers and unprotected by adults because of their skin color.

A story that stood out was the abuse that happened after P.E. class.  White students would flush all the toilets to make the shower water hot.  When the Black students would try to run out, they would cut their feet on broken glass that was purposely placed in their path.  The young ladies would have their dresses pulled over their heads in the restrooms and get shoved into the hallways for everyone to humiliate them.  It made me cry.

On a  lighter note, I was able to thumb through some archives and see what Mr. Clinton was up to 23 years earlier on February 28th.  It made me smile that the President started his day with a jog.

There was a replica of the Cabinet Room and the Oval Office as it appeared during the Clinton Administration.  I noticed how the Secretary of Education had a seat at the head of the table. 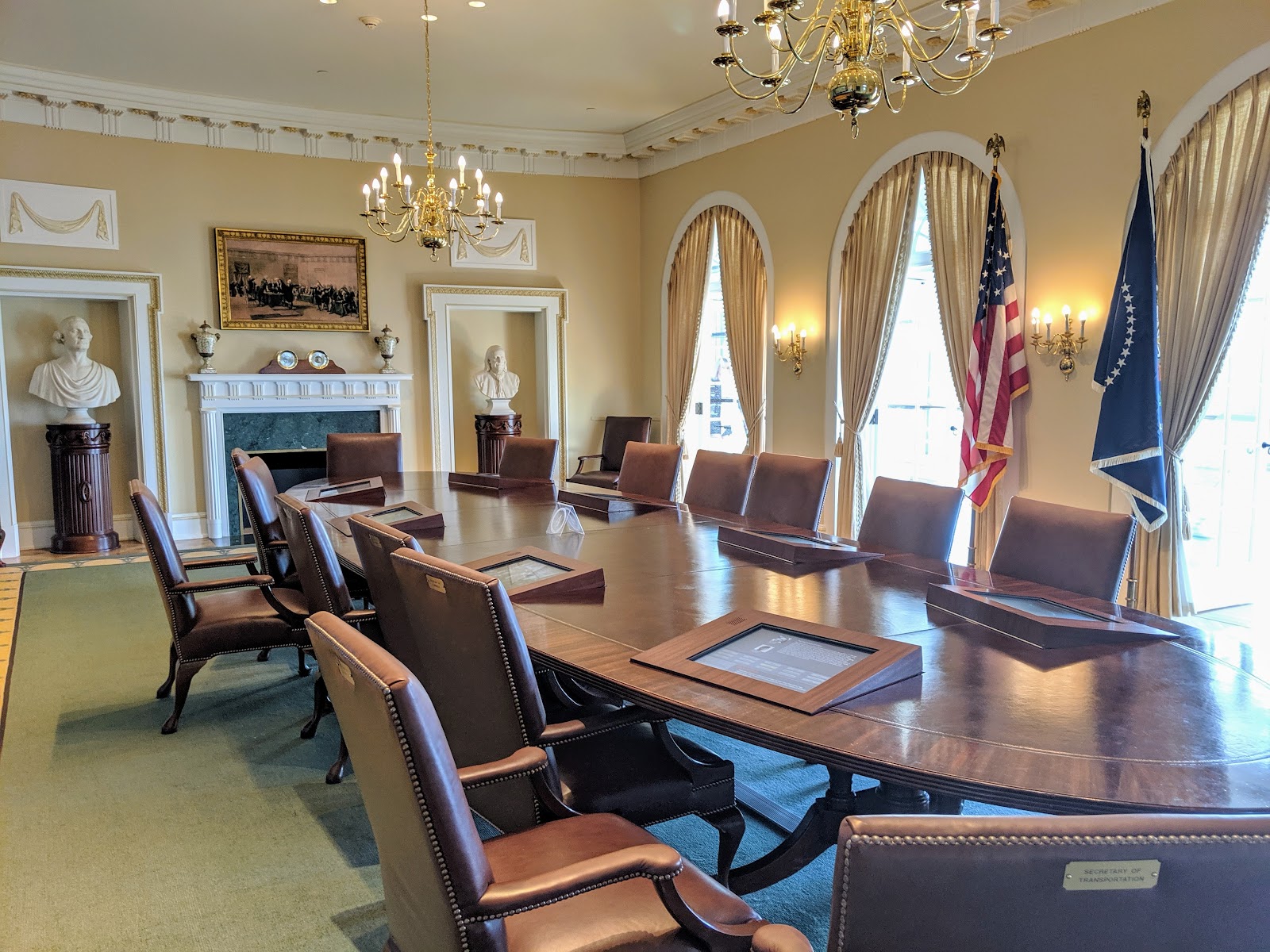 There were so many artifacts on the two floors of exhibit space including information about the Family and Medical Leave Act of 1993, information technology, personal letters, gifts, awards, and extracurricular activities.

There was a temporary exhibit of the 1990s.  I had to get a photo of the Forrest Gump running attire from the movie.  As President, Bill Clinton was gifted with numerous saxophones and his very own Presidential cruiser bike.

The Little Rock Half Marathon Challenge

I like how Little Rock offered different races to make it worth your while for traveling from out of state or other countries. I met a guy from Amsterdam who picked Little Rock at the last minute due to the Coronavirus cancelling the Tokyo Marathon with the exception of elite runners.  The #LRM would be my first time running back to back races, but that’s why it’s called a “challenge.”

I was not trying to overdo it with a 10K; I kept it light with a 5K.  This would be the race I would get into the 1980s theme. My first idea was to dress as a female hip hop artist.  Then, I thought it would be the last day of Black History Month. Let’s go with Flo-Jo, the 100m and 200m world record holder.  I remember watching the ‘88 Summer Olympics because I was training for the United States Youth Games. Florence Griffith Joyner was and still is one of my sports idols.

I went to a seamster and had him cut the left leg out of a pair of leggings.  He sewed it onto an old swimsuit once used as a layered suit to create more drag when I was cross-training.  The fish nets were a last minute decision because it was around 35° at the start.

The benefit of staying a block from the starting line was being able to stay warm in the hotel lobby.  I could have gone to the Marriott and waited in the Convention Center also. I ran a few warm-ups while a woman from El Paso snapped my photo.  I was breaking necks left and right. I received so many compliments. I was mistaken for dressing as Jazzercise which I totally forgot even existed.  It goes to show the lack of credit Flo Jo has for embracing femininity in her sports attire long before Serena rocked a catsuit.

The course was pretty simple.  It was a little tight for running room in the first turn.  The last half mile or so would be a preview for the half marathon finish.  According to my Garmin data, I ran long on the course. I would use this data to make sure I ran tight tangents on the half marathon.

In addition to the #LRMarathon being known for the world’s largest marathon finisher’s medal, the Chicks in Charge (Race Directors) demonstrate inclusion by allowing a 6 a.m. start.  This allows pre-approved walkers and runners the benefit of a two hour early start. I was having coffee and oatmeal as the early starters made their way across the Broadway Bridge.

I did not leave my hotel room until 7:47 for an 8:00 a.m. start.  Again, the Double Tree or the Marriott downtown are the best hotels to stay for this race.  There is no other race I have been this fortunate to have that extra lounge time.

The first 3 miles took us across the Broadway Bridge and into North Little Rock.

There were a few raindrops between miles 2-3.  The rain was not supposed to move in until later in the day.  Thankfully, it was just a few drops that ended. We were blessed with 50-60° temps.  I have read that no two years are alike with heat, rain, sleet and snow all being possible conditions for this time of year in Arkansas.

Miles 4-5 were the same course as the 5K in downtown.  I had a lot of appreciation for the Spin Class on the side of the road supporting runners on our way out to the airport.

Miles 6-8 was the flattest and most uniform with straightaways.  The head wind picked up which resulted in tailwind on the way back.

After leaving the airport and mile 8, I was feeling cocky.  I thought, “where are the hills I read about?” This next photo is the “hill.”  It is barely anything. I would classify this course as flat. I hear there are some real hills in the full marathon though.

Miles 9-10 is where we entered MacArthur Park.  The crowds were thick in this area. There were all kinds of beer and mimosa stops.  There was even a communion if you were feeling holy.

We passed by the Esse Purse Museum.

Another popular stop was grilled pineapple.  It. Was. So. Sweet.

Next, I was on the lookout for the Governor’s Mansion and my chance for a photo opp.  Would Governor Asa Hutchinson be there?

Yep, he sure was.  Regardless of political affiliation, name one marathon or half marathon where the Governor comes out to support.  I’ll wait.

I was down to the final two miles.  Sounds very easy, except the outside of my left foot was hurting. The tips of my right toes were hurting.  I was running on adrenaline at this point. God bless those marathon runners is what I thought as we approached the split.

For the last mile I had an attitude.  I was mad at the shoes, mad at my foot and mad that I would not be able to hawk people down at the finish line.  But wait. The race wasn’t over. One of the most talked about stops was on the final stretch. The L’Oreal Lipstick stop is in place to make sure we look our best in those finisher photos.  A big smile came upon my face when I saw my lovely Sorors of Alpha Kappa Alpha Sorority, Inc. providing the lipstick. This was the support I needed to make it the last few strides.

The Mayor of Running, Bart Yasso announced my name as I worked my way inside the convention center to get my finisher and challenger medals 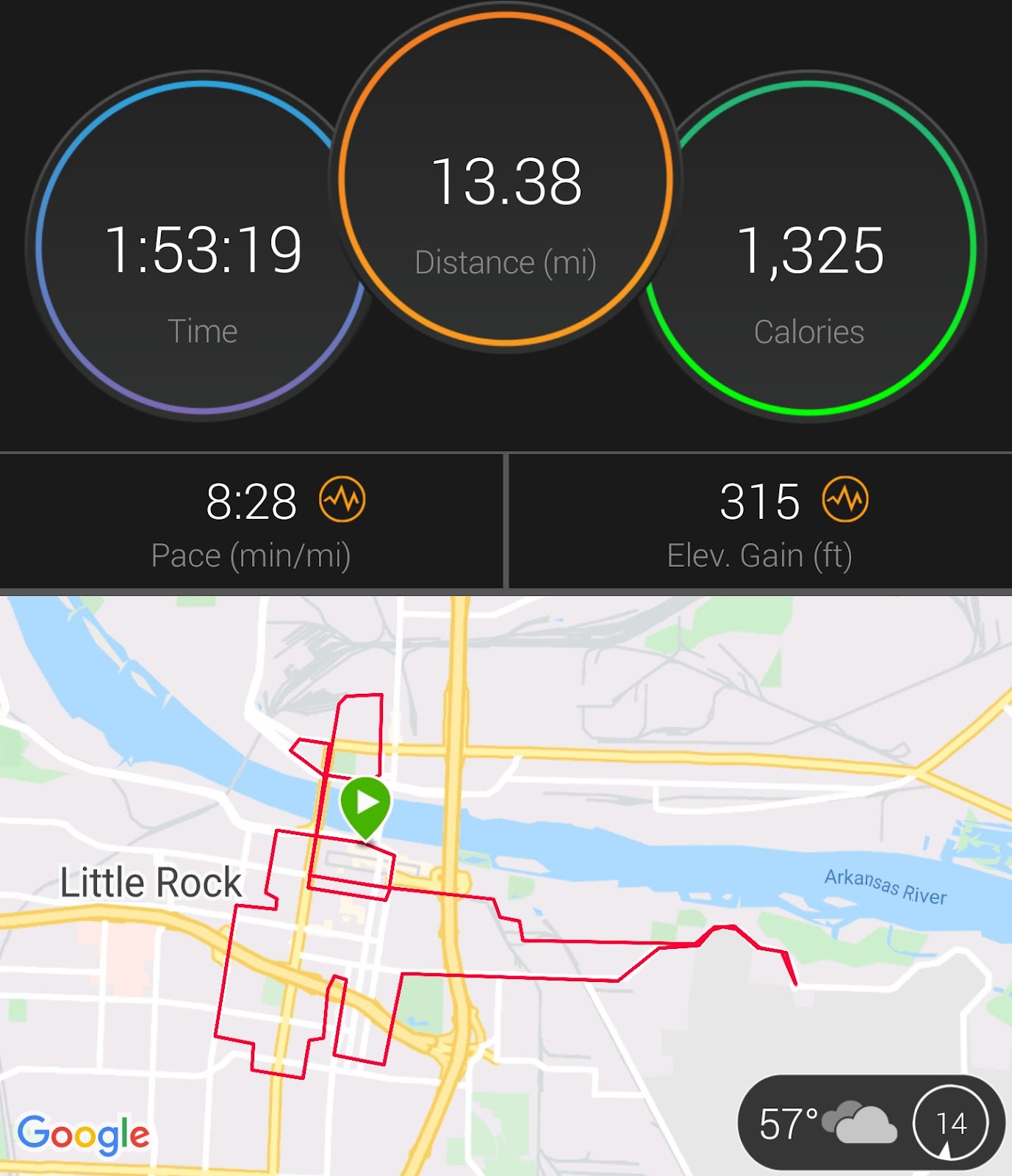 My perception of Little Rock has changed.  The city was very welcoming, the people were friendly, and there are some really nice areas in Little Rock.  I would recommend the #LRM because:

Your Time Is A Valuable Asset Tools for Student Projects