Cristiane is one of many champions being highlighted by the GEM Report in the run up to the launch of its 2020 publication on inclusion and education: All means all, due out 23 June. In their own way, and in multiple countries around the world, these champions are fighting for learner diversity to be celebrated, rather than ignored. 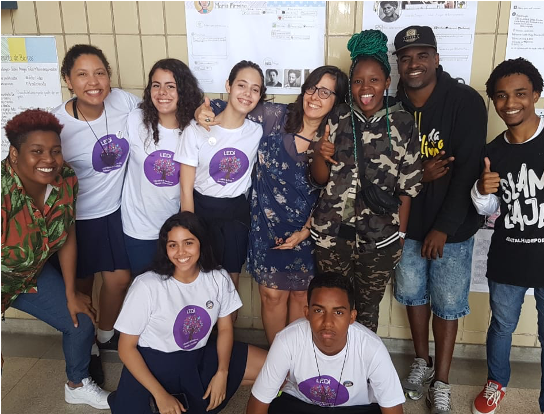 Cristiane is a high school teacher at Colégio Pedro II, a public and federally-funded mega school in Rio de Janeiro hosting 13,000 students. She runs a “gender lab” at the school where students can openly discuss issues of sexual orientation, gender identity and expression and inclusion.

When Cristiane first started working at the school, partly due to the socio-political context, gender issues were not discussed either by students or by some of the teachers. All of that began to change in 2013 when Brazilian youth started to organize as a political movement and schools started paying attention to their needs.

As a result of this change, in August 2015, the teachers in Cristiane’s school called for a “laboratory of studies in education and diversity” to be created. Thanks to their efforts, the dean signed a document officially bringing the lab into existence as an afterschool program. Over the years, thanks to requests from students, teachers, and school psychologists for tools and resources to face issues of sexual orientation, gender identity and expression in school, the lab has expanded to provide workshops and teacher training as well.

Cristiane believes strongly that inclusive education is often a misunderstood concept. Schools often understand inclusion as educating children with special needs in the same classrooms as other children, but they do not think of the inclusion of transgender students, for example. Brazilian society considers this subject taboo. She has seen transgender students dropping out of her school due to lack of access to proper bathroom facilities or because school personnel used their birth name instead of their chosen name when addressing transgender students.

“I have always been concerned about justice. As an educator, my role is not only to teach English, I want my students to be sensitive to the injustices of society and be aware of the importance of inclusion. My goal is that my students become agents of change”.

The lab aims to raise student’s awareness not only while they are at the lab but during regular classes and outside of school as well. For Cristiane, all approaches should consider how disadvantages intersect. We cannot just talk about LGBTQ people in abstract, for instance, but must ask ourselves which LGBTQ person are we talking about? This then often means our analysis changes from talking about an LBGTQ person to talking about a bisexual, indigenous, middle class woman, for example. It gives us a far greater understanding of the complex needs that a person might have.

“Since inclusive practice is a continuous and collective process, it is necessary to educate with the understanding that, in fact, we are all different; we cannot educate students just to accept a group of people that we believe are different from us. This means that strategies, instruments, and practices need to be diverse in order to welcome everyone.”

The 2020 GEM Report will be launched on 23 June. Sign up to receive it in your inbox as soon as it is released.